I lose many battles in this house, but no battle irritates me more than the endlessness of incoming paper.

The paper that enters my, and most everyone’s house includes, but is not limited to: END_OF_DOCUMENT_TOKEN_TO_BE_REPLACED

Do you want to save money when you shop? How do you go about saving your money? Do you look for sales, shop at thrift stores, don’t shop at all, or clip coupons?

Shopping with coupons is one way of getting a better deal. The challenge however is to remember that you have the coupon handy when you need it.

I am eternally challenged with this coupon clipping. But I am also optimistic that proper coupon clipping and shopping will save me money. We’re looking at a pro and con situation here. END_OF_DOCUMENT_TOKEN_TO_BE_REPLACED

Parenting and its endless challenges takes on a new spin during summer vacation, it seems.

It’s not that we’re less consistent or inclined to let things slide more often, although that does happen sometimes. Rather it’s about the whole family being more relaxed on a different level. There are less schedules to follow, particularly when no one is going to work or camp, or lessons of some kind, and we’re all just kind of living into the day.

But living with kids will eventually nudge you back into reality when you observe certain behaviours that you think have been dealt with in the past. Certain inappropriate behaviours that resurface, and make you shake your head in disbelief. You may lose it, you may cry, you may lash out, or you may sit down at the blog to post out a solution. END_OF_DOCUMENT_TOKEN_TO_BE_REPLACED

The topic of money is kind of like a synonym of parenting, isn’t it? Money, or in my case, lack of (ha) infiltrates every parenting decision in one way or another, it seems.

Frankly, the expense of having kids, especially athletic kids in competitive sports, is taking its toll on us. How are we going to keep this up for the foreseeable future?

Up to now, we have only followed a loosely-designed family budget of how much to spend on what since by nature, we are pretty frugal. We don’t love shopping, nor do we shop as a hobby. We don’t own a lot of fancy clothes or shoes, we don’t eat out much, we don’t have the latest and greatest electronic gadget as soon as it comes out. We each have cell phones and computers that are minimum 3 years old and they all still work fine. Our biggest expense, outside the house, cars and associated expenses as well as Ben’s hockey, is probably food. We spend money on whole food which, ironically, isn’t always cheaper than processed fake food. We buy only reputable meat (not factory raised) which usually is more expensive. I also invest in an organic produce delivery service for reasons I’ve mentioned here which is part of the [unofficial] food budget and gets eaten, and not wasted.

The rest? Well, there isn’t much left after all that. Which is why for this summer, I have not booked the kids in any camp.

Instead, I am going to set up a cash budget.

END_OF_DOCUMENT_TOKEN_TO_BE_REPLACED

She wrote a post about how she went on strike at her house, and in turn this caused me great reflection on my own sometimes over-controlling ways of trying to parent my two imps.

What exactly is my aversion to their being more independent? Will a strike, MY strike, help them see how much is done for them, regularly? END_OF_DOCUMENT_TOKEN_TO_BE_REPLACED

Well I don’t know if that’s what he will be saving for, but that is something he will be able to afford should he actually earn his pocket money in the way we introduced this topic. 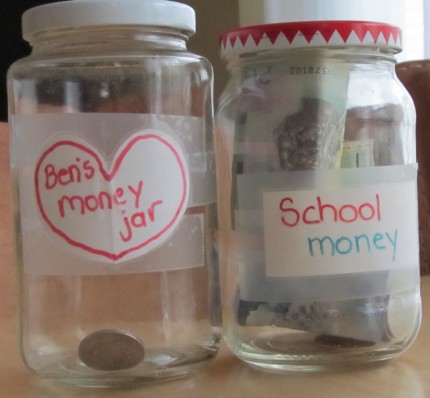 A few years ago I started mentally clipping every article or blog post or opinion about allowances for kids. Should they earn it? Should they be given it? What is the amount, the limit, the purpose? How should they (or you) keep track of it? Can they spend it on anything they want, even pop and candy (which is allowed but limited in this house)?

Ben’s money jar is tied directly to earning cash for household jobs well done. I came up with the idea without my usual planning, organizing, researching and other time-wasting activities I find myself engaged in with my technology toys. Partly because I haven’t had time to play with my technology toys (except the blackberry, what would I do without thou?)…

The idea is simple: END_OF_DOCUMENT_TOKEN_TO_BE_REPLACED

It’s Friday after-school pickup time and after some rain during the week, Benjamin is very happy to see that I brought the soccer ball along. He and a bunch of boys start their soccer game while I chat with another mom about a bully situation in one of the classrooms at this same school.

While I talk to her and to another mom, I keep an eye on Sonja who is dressed in a green Tinkerbell costume and showing off her wand to some other girls in the playground area of the school yard. It’s getting later, and colder, and some of the soccer players head home. Ben and two boys start to wrestle and roll around on the grass, and then break up and run off into different directions.

I see Ben out of the corner of my eye run straight toward Sonja and her group of girls. Even before it happens, I know it’s about to happen…he sucker-punches her from behind and runs to hide behind some structure. END_OF_DOCUMENT_TOKEN_TO_BE_REPLACED

Week 3 of the new school year is ending.

I can be out further cash for some Scholastic book orders (which I may do if I can actually find something that doesn’t push Nickelodeon or Disney) which would help me out with the pending Christmas shopping season upon us (I hate shopping).

I could also be out of $5 for one child if he would be participating in the Subway lunch (we packed him his own sandwich, and a plum and apple instead of the fruit roll-up which he would be receiving).

I could also be out several more $5s over the course of the year for a variety of pizza lunches which, I believe, would go toward the school itself (also a worthy cause).

There will be further donations requested for the upcoming Thanksgiving season, Holiday season and who knows what else. Last year we donated a shoe box full of items children in Cuba could use (toothbrushes, crayons, erasers and pencil sharpeners, small toys) which Benjamin was able to help pack up, but still, it cost more money. There was an understood implication that each child will bring a shoe box filled with stuff…which draws home the point even further: when does it end? Does it end?

It’s a difficult question with an even more complex answer.

Note please that I am not against fundraising in principle. But please note also that I do not support each and every cause the school is pursuing. We have a short but well-researched list of whom we like to donate to, research that was conducted by DH who determined which cause will use the most of the funds per dollar donated toward the actual cause (as opposed to sending us endless junk mail requesting the urgent need for more of our funds). Doctors without Borders is one of the most efficiently run organizations according to our research who uses 80% of each dollar donated toward the actual cause.

It’s a fine line, this fundraising with school. We debated at the dinner table and after we finished, little 3 year old Sonja said she ‘didn’t want to participate in cancer research’, referring to the Terry Fox donations we are to collect around the neighbourhood (not the kids, the parents. Kids are highly discouraged from going around the neighbourhood to collect money for Terry Fox). We spent some time discussing further, for the kids’ benefit, about how we like Terry and how heroic he was for doing what he did, and how we can admire what he has done without necessarily giving money to the cause. We even talked about our own levels of discomfort. We said:

Will it make a difference?

Will it help the children understand to some degree that we have choices, even if it means that they don’t get to eat a Subway lunch when other kids do?

I have a feeling this is going to be a long journey.

I thought the toothfairy dispensed 25 cents for lost teeth.

and for those who want to leave a shiny coin, $2.

Doesn’t everyone keep a jar, or a bowl, around the house where loose coins get dropped into?

The kids have various piggy banks that they like to play with. Two are pigs, one an airplane, and one a plastic peanut jar that peanut butter used to come in. The mom of an old boyfriend saved it for me back in my university days, and I still have it. It’s full of coins!

If you pour out the coins and start sorting, and counting them, it is actually astonishing just how much money you have. This is legal currency, cash flow, and there is no reason why you can’t use these coins on your next shopping trip.

We counted out the coins and placed them in two snack-sized ziplock bags. One contained $1 coins (loonies here in Canada) and 5 cent pieces (nickels), and the other contained the twoonies and dimes. ($2 pieces and 10 cents). All together, we probably had over 20 bucks! Perfect for the farmers’ market.

This was Benjamin’s big opportunity to buy, and pay for, carrots, cherries and chocolate-drizzle pecan tarts. And he did so with pride and joy.

The next step is to teach him the value of money…