Walking to school on a dry day takes about 15 minutes if you include a quick stop at the corner halfway there to wait for other kids to meet up with us. END_OF_DOCUMENT_TOKEN_TO_BE_REPLACED

I am trying to get into the Christmas spirit.

Well, it worked for a while…late November, we had some big, fat snowflakes! We trekked through them to attend a local Christmas Open House at a community centre, and the white backdrop behind this beautiful wreath was very fitting. END_OF_DOCUMENT_TOKEN_TO_BE_REPLACED

This of course led to a favorite Christmas time activity:

She’s licking the cookie batter off the spatula. After helping me make the batter, that is…

Today, a huge recycling truck is stuck in a snowbank in front of my house.

Look. I like snow. I love the white, fluffy, pristine look of fresh snow. I like the way the neighbourhood gets together and helps each other dig out of the latest dump. Really, snow is nice.

But not in March.

In March, I want to plant seedlings, or at least plan my garden. I want to think about flowers, and which bed I’m going to dig up this year.

I don’t want to have to worry about snow shovels anymore.

Not that I can even find them right now. Benjamin and I went out to shovel a bit today, and intended on going out again later, so we left the shovels leaning against a pile of snow.

Can’t see them anymore. They are snowed in. There is so much snow, I don’t know where I’m going to put it tomorrow. The street maybe?

It’s 7 pm and it’s still snowing. According to some aviation weather radar thing, the system will be over us, and dumping snow, till about 4 am.

I don’t know what we’ll do tomorrow. And we’re out of coffee cream. Walking to the store right now is not very appealing. The street isn’t plowed yet, and since we’re not a major route, we may not be plowed till who knows when tomorrow.

So, milk in the coffee tomorrow. Blah.

One guy in the neighbourhood stuck his shovel into a pile of snow upsidedown, with a sign that said: I QUIT

Ha. That’s pretty much the sentiment for most of us these days.

Enough already with the snow. Please.

I got the idea here, and thought it was grand!

We had some plastic cups sitting around, filled them with water and a few drops of food colour, and off to the freezer they went.

The end result is evident in my new header!

Yep. It’s coming. A snowstorm watch is in effect. Apparently.

Or not so apparently. As right now, there is no flake of snow to be seen anywhere. Only bright sunshine, shining in the bay window, highlighting every spec of dust and doghair all over the friggin place.

Everyone on the radio and tv is all excited about this.

Imagine: a weather story about a snowstorm! In January! In Canada!

Today the complete opposite is true.  It’s clear, sunny, quite cold (but it’s January so that’s allowed), and fairly calm in terms of wind.

Yesterday the winds were so strong they were damaging in some areas.

I left some of the garbage and bins that had to be put out last night on the front porch, for hubby to put to the curb when he gets home. The porch didn’t get completed due to weather related delays when construction started back in August, so the railing is still missing. Guess how happy hubby is about the big dent in the car when the winds knocked the composting bin over, right onto the hood of the car.

…but winter has arrived with a vengence!

At the community centre where the baby got her first immunization today, I managed to get stuck in the snow.

Naturally, the little snow shovel that we normally keep in the car wasn’t there. Not that it would have made much difference. The parkinglot was a mess, and my little shovel would have been useless.

So I grab the baby, and walk up to the community centre where I notice a bunch of guys standing around fiddling with a snowblower. I asked them if they were going to plow the parkinglot, and one said:

The weather had been the top news story for the last 48 hours, there are snowbanks on all roads higher than two toddlers stacked on top of each other, and the community centre caters to, among others, old people and children.

Anyway, I get to the waiting room, and look for my neighbour’s phone number in my cell phone. She was kind enough to sit with my toddler so I wouldn’t have to drag him with me.

But the phone number is not there. It is not programmed into the phone for some reason.

So I look in my wallet where I normally keep a sheet with such info on it. Guess what…not there. (Item 254)

I call husband at work, explain my situation, and ask him to call the neighbours. He should have their phone number in his wallet (item 252, guess I can cross that one off my list).

When doctor comes to get us, I tell him that my car is stuck and ask him if there are plans to get the parkinglot plowed. He was surprised to hear that the guys weren’t plowing. You know, the ones that I saw earlier who said they weren’t plowing today. Guess the snowblower needed 5 adult guys to keep it company while resting its motor or something.

Anyway, to stop this incessant rambling, I’ll just tell you what happened at the end since it’s obvious I got home or I wouldn’t be typing this post.

My doctor donned boots, a hat and gloves, and helped to dig me out, and push me all the way out to the street.

PS the neighbours never got the message because their computer crashed and he had been on the phone. But since I wasn’t late, no one was concerned.

have to do with this? 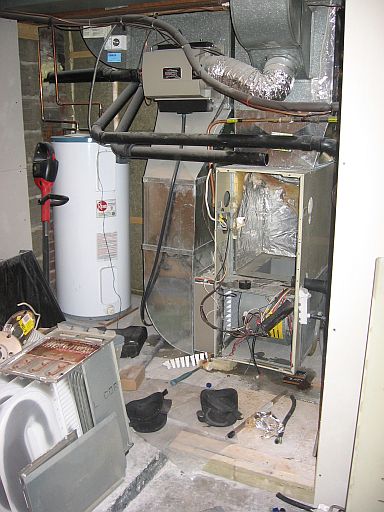 The bottom picture is my furnace. For those who do not have experience with furnaces, or don’t even know what one looks like, let me tell you this: this is not a normal furnace. It’s supposed to have a door covering all those wires sticking out. And the tools lying in front of it….not normal.

My furnace broke last night. It was cold and all the remaining snow outside is now frozen. Having no furnace to heat the house with a sick toddler and a newborn baby is, um, fun. I got space heaters blowing hot air all over the place. Wonder what my electricity bill will look like for this month.

The first picture is of a normal looking wasp. The wasps we found yesterday in the broken part of the furnace did not look like this. They looked, um, fried. Or bbq-ed. Because you see, they managed to get into the furnace from the chimney during the summer and make a nest in there.

The part we need to fix the furnace is coming from across the border. Maybe today, maybe tomorrow, maybe next week.

It promises to be an interesting week…

Ironically, this exact thing has happened to me two winters ago when the first kid was an infant…

This is becoming a new tradition for our family.